skip to main | skip to sidebar
All photos, including the one behind the blog title, are the sole copyright of Vicki Maheu, aka ThriceBlessed.
Please be kind & do not copy any photos here unless you first receive permission.
Also, if you have a photo blog, and you link to me on your blog, I'll return the favor and link to you, just leave a comment letting me know that you linked to me!
Thank you!

Okay, its time for more assignments from the Free Online Photography Course I have been taking.  I haven't done assignment 1 of lesson 3 yet, but the order of the assignments doesn't really matter as much as actually DOING both of them. So here goes... the directions said, "Again, set your camera up and take two photographs - this time they should be exactly the same, but use your aperture to make your subject the only thing in focus in one of them and then to make everything in the picture in focus in the other one."

I decided to make my subject my favorite chess piece.  Both of these photos were taken with Aperture Priority.  In both photos I manually focused on the Knight's eye, to get the greatest detail in that spot, and in both photos the ISO was 100, there has been no post processing of either image.

On this one, the aperture was F32 (the smallest available)  and the shutter speed 5 seconds. Even though the point I manually focused on was the same as the second the photo notice the extreme difference in the results.  For the most part I like the second image the best, but I do kind of like the cross on top of the king in the foreground of this first one.  I wonder, if kept playing around, could I have gotten the cross AND the knight to be focused, while everything else was fuzzy? 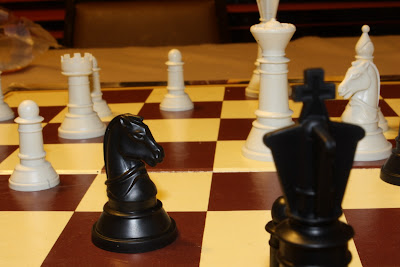 Now here is this one, the aperture was F5.0 (largest available) and the shutter speed 1/8 of a second.   Notice how my favorite piece now stands out from the rest of them! 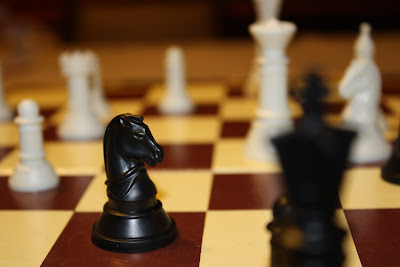 Visit My Other Pages